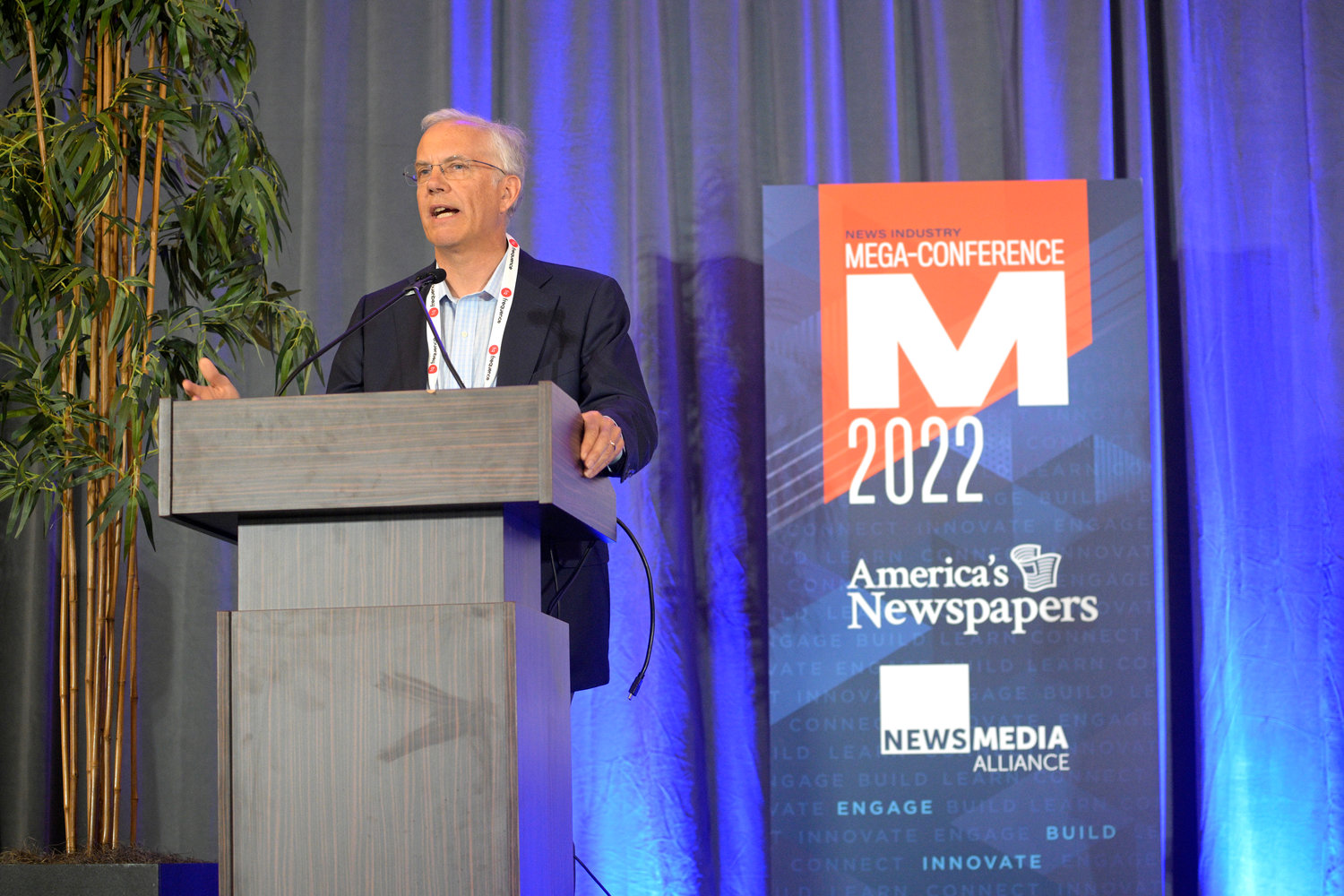 Les High, publisher of the Border Belt Independent, has developed a model to bring in-depth reporting to underserved areas, both online and in print. The Border Belt Independent was a finalist for the Mega-Innovation Award, which was presented during the News Industry Mega-Conference, Monday, April 11, 2022, in Orlando, Florida. (Photo by Phelan M. Ebenhack)
Posted Tuesday, April 12, 2022 10:24 am

The Border Belt Independent, a nonprofit, online newsroom that covers four rural, high-poverty counties in southeast North Carolina, has developed a model to bring in-depth reporting to underserved areas, both online and in print.

The entry, presented by Les High, publisher, was a finalist for this year's Mega-Innovation Award.

High said, "It’s an honor to be a finalist for the innovation award, but everyone, from small weeklies to large dailies to online start-ups, is doing innovation every day. Some of it is quite remarkable and some of it is just to survive, but it’s heartening to see the spirit of collaboration among large and small news organizations to fulfill our essential role in our fragile democracy."

The mission of the Border Belt Independent (borderbelt.org) is two-fold: to publish stories that make people’s lives better, and to support journalism at existing small newspapers in the region.

The Border Belt Independent focuses on the challenges faced by rural North Carolina counties, such as education, health, mental health, the environment and issues that adversely affect children. It also serves as a watchdog over elected and public officials.

All stories are provided at no charge to the six local newspapers in four of the poorest counties in the state: Bladen, Columbus, Robeson and Scotland. Newspapers are free to publish BBI stories in print and online. High-resolution photos are provided if requested. Nearly all stories published by the Border Belt Independent have been picked up by partner newspapers.

The idea is that the partnership will produce reliable, trustworthy journalism in the region, with local newspapers covering traditional subjects such as meetings, sports and local events and the Border Belt Independent providing issues-oriented reporting. Some stories are county specific while others look at issues across all four counties.

High founded the Border Belt Independent in March 2021 with a three-year, $495,000 grant from the Kate B. Reynolds Charitable Trust. He is a third-generation journalist who was publisher of his family’s newspaper, The News Reporter in Whiteville, North Carolina, until his family sold the paper to its editor in August 2021.

High said the Border Belt Independent is being very intentional about working to develop partnerships and to help provide the newspapers in these four counties with in-depth reporting that readers need to see and to provide a regional platform to help them solve some of the challenges that people who live in high-poverty rural areas face every day.

"The Border Belt Independent essentially serves as a news bureau," High said, "for these four counties." He is hopeful that the model he is working to build could also be replicated in Northeast North Carolina, where he said there also is a great need ... and maybe even across the nation.

In submitting his entry to America's Newspapers, High shared this quote from an article he was interviewed for in Publisher’s Auxiliary:

“I had a great concern that the weight and importance that local newspapers once carried and the influence they had for the greater good was waning. When you don't have strong journalism in communities, democracy suffers. And I started thinking about ways to increase news coverage and build more investigative capacity for The News Reporter.

“And then I thought about how we might expand this to a rural region like these four counties, then I said, OK, if we can make this work here, can we replicate it in other rural regions of North Carolina and the nation?” High added. “We've seen venerable news organizations come under real threat in recent years. Reporters have fewer resources and there’s always the fear of losing their jobs. It doesn’t help when our leaders label journalists as enemies of the people; yet, we carry on when the tough stories are required.

“If we can all start thinking more in terms of collaboration and looking to nonprofits to provide reporting capacity in partnership with local newspapers, we can do the kinds of stories our communities deserve in today’s environment of willful disinformation that’s coming from untrustworthy sources."

View the PowerPoint from the Mega-Conference presentation in PDF format