The Sun-Sentinel became more digital by getting rid of digital 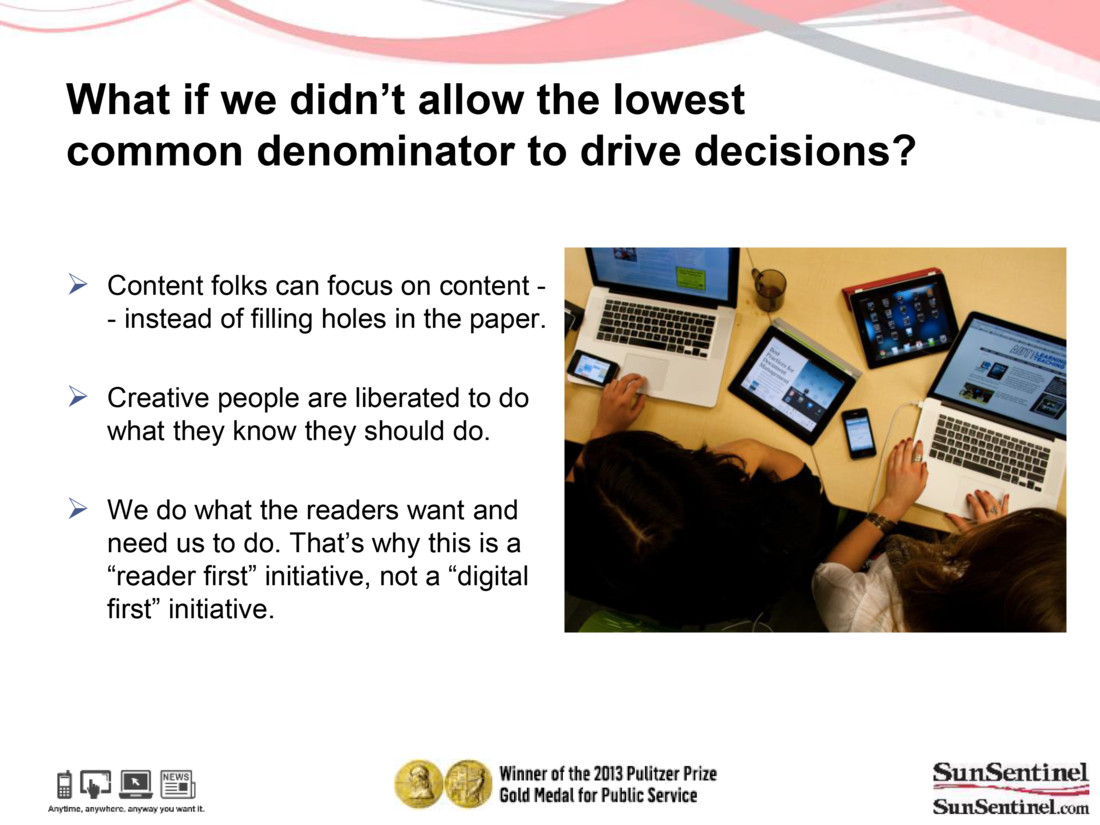 South Florida's Sun-Sentinel has been cited as having one of the country's most innovative newsrooms when it comes to integrating digital and print journalism. Publisher and Editor-in-Chief Howard Saltz told attendees at the 2016 News Industry Summit how getting rid of the newspaper's separate digital "team" resulted in a forward-thinking, fully integrated newsroom with a "reader-first" mentality.

"Until 2011, digital and print products were created by distinct staffs, a common practice in our industry," said Saltz, who joined the paper as an editor that year. "No matter how much we embraced digital, print was the beast that had to be fed ... we set out to tame the beast."

The first step was asking what would happen if print production did not drive content decisions. In the Sun-Sentinel's "New Digital" model, no one writes or photographs for a particular platform or even a particular section. The newspaper, which was already in the process of downsizing, combined print and digital teams.

"Content folks focus on writing content for all platforms instead of filling holes," he said. "Creative people are liberated to do what they know they should do. That's why this is a reader-first initiative, not a digital-first initiative."

Saltz said it was easier to teach digital skills and objectives to 150 journalists than it was to teach journalism to technical people. The large, experienced staff of journalists worked on all platforms, which imbued digital platforms with journalistic values. It also created greater efficiency that blunted the impact of budget cuts.

In addition, editors learned how to use the content management system, how to write SEO headlines, send text messages and participate in social media. Print section editors became section editors, responsible for content regardless of the platform.

He reminded attendees that they are in the business to gather and distribute news, information and advertising, and to engage and enable communities – on multiple platforms.

He cited examples of companies that failed because they didn't realize what business they were in and those that thrived because they embraced more than one thing.

"McDonalds is successful because it knows the company isn't just in the hamburger business ... It's in the food business," he said. "They've added fish, chicken and breakfasts."

The changes didn't come without a few hiccups. Some employees had the perception that leadership didn't care about print. Saltz humorously related a story about "foosball-gate" and how something intended to be hip and fun alienated old-timers.

"We put a foosball table in center of the newsroom because that's what the cool hipsters do. It was symbolic," he said with a laugh. "It embodied everything the old-timers resented, even though no one was playing. We moved 'it' to the lunchroom."

On a more serious note, Saltz said that leadership should have prepared the production desk even more than they did.

"We should have had production editors working along with assigning editors before launching the initiative, to learn how to plan and book sections smartly, efficiently and strategically.

The biggest – and best surprises – were the ease with which reporters and editors adjusted to earlier deadlines and how broadly the newsroom embraced the changes.

"Once folks saw what it meant in action, the more they liked it," said Saltz.

Mary Ann DeSantis is a former SNPA employee (1989-1998). She is now a Florida-based freelance writer and can be reached through her website at www.maryanndesantis.com or via email at desantis.maryann@gmail.com. You may also follow her on Twitter @maryanndesantis.