Media leaders and Google discuss paths to a sustainable future 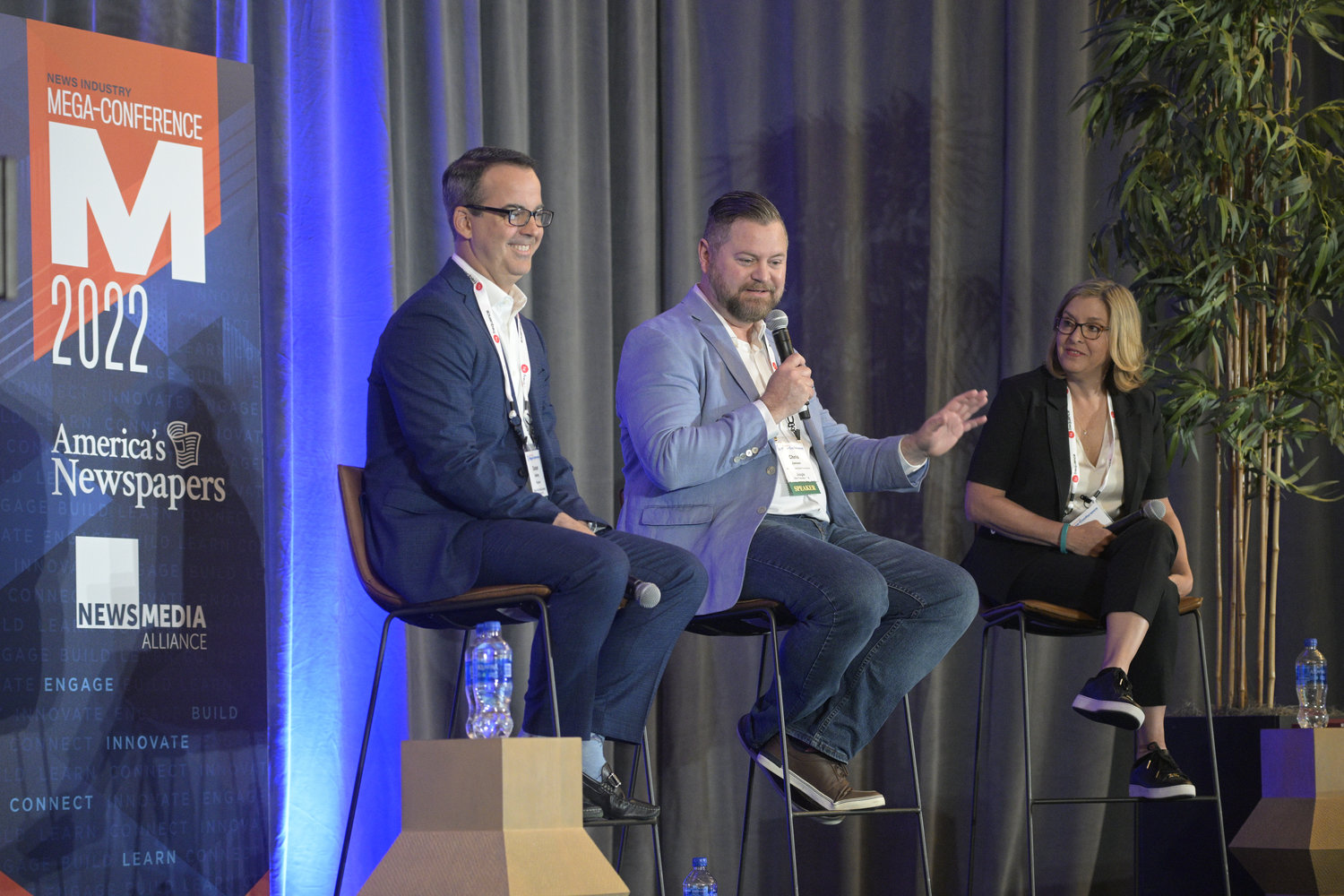 While newspapers' engagement with Google has the potential to just be one giant awkward moment, Chris Jansen, head of local news, global partnerships with Google, said he welcomed the opportunity at the 2022 Mega-Conference to engage with publishers during the opening keynote session.

He outlined a number of opportunities that publishers of newspapers at all sizes have with Google, including the Google News Lab and Google for Journalists and was open to discussing the challenges that Google and publishers face.

He was joined in this opening session by PJ Browning, president and publisher of The Post and Courier in Charleston, South Carolina, and Conan Gallaty, CEO and president of the Tampa Bay Times.  Dean Ridings, CEO of America's Newspapers, facilitated the discussion.

Gallaty told Jansen that the large amount of inbound traffic from Google — Google News, plus search and traffic — is a "point of trepidation" for him, with too much reliance on one source for the industry's audience.  "That worries me," he said, "about the future sustainability of news organizations."

But, when Ridings asked if it was possible to simply stop using Google products, he said the answer — for today — is no.  "It is a requirement today to use Google services."

Jansen outlined the three key focus points of the Google News Initiative:  elevating quality journalism, evolving business models for its sustainability for the ecosystem and empowering newsrooms with technology.

"If you write one thing down," Jansen told publishers in the audience, "write down digital growth program." He said Google has massive amounts of resources available to publishers.

The Post and Courier was a participant in the Google News Lab, something Browning says was a huge help in growing the paper's digital audience.  She said it brought the discipline of technology into the paper's work to build a five-year financial model and better understand its local, addressable market.

While Google brought its account managers and technology to the table, the shared experience with other Google News Lab cohort participants continues to be valuable.  "Today, we still talk and we are still learning from one another."

The Tampa Bay Times also participated in the Google News Lab and Data Lab, which Gallaty agreed was a wonderful experience.  The real value, he found, centered around the connections that were made with others in the industry, connections that have continued to this day because "you don't just do the work in the lab, right? It's really the work after the lab."

It's a continuous evaluation, Browning said.  Her team continues to meet regularly to review data points.

Ridings asked Jansen if Google would consider providing grants and funding to local news organizations that aren't tied to the use of Google products.

Citing Google's innovation challenges and the Journalism Emergency Relief Fund, as examples, Jansen said that the majority of the funding that Google provides is not tied to Google products.  "If there is the perception that working with us comes with strings attached, we need to change that perception," he said, "because that is not how we talk about our business and our partnerships at Google."

Browning questioned how many newspapers are able these days to do local market research, noting the expense involved with those projects.  "I'm wondering," she said, "if there's an opportunity ... for publishers to be able to understand the digital marketplace and readership habits better on a local level."

Jansen said Google often gets approached about sharing information about people's habits and online usage, which quickly turns into a conversation about user privacy.  But, he said he loves the concept of publishers forming an information consortium of some type where they could share their data anonymously and work together to better understand broader trends and patterns.

Gallaty questioned Jansen about the financial impact for Google with regard to news content.  "We don't make money off of news," Jansen responded.  When someone executes a news query and finds articles or content that they may be interested in, there are no ads on those pages, he said.  "We do not put ads in the feed in the Google News app. So, we're not directly monitizing news content.  That content still lives on the properties of the news publisher, and the monetization happens there."

He also said he believes it is a myth that Google's success is at the expense of news publishers when it comes to digital advertising.  It's more complicated than that, he said.  "So, yes, many, many news publishers use our digital advertising products to manage their digital ads business on our site;  the vast majority are the direct campaigns that you are selling.  And, if you choose to use our products, sure — we charge a very, very tiny technology fee, just for serving the ads on the website."

While there are no ad units on Google News, Gallaty said a lot of news search happens on general Google search listings, where there are plenty of ad units.  "So there is, I would think, a benefit to Google to attracting large audiences looking for top information on news and serving ads up against that."

Browning agreed that this is an area that needs to be further examined, as it's hard to distinguish between those two types of content.  "Generally speaking, it's a Google world today," she said. "It would be great if we could define it better."

Two questions were posed to Jansen that were submitted in advance of the Mega-Conference from members of America's Newspapers.

Julie Anderson, executive editor of the Orlando Sentinel and Sun-Sentinel, asked: "Has Russia been able to completely block Google News and YouTube from disseminating independent news reports of the Ukraine invasion? What is Google doing about it?"

Jansen said Google is aware that some users in Russia have reported not being able to access Google News, but said Google is seeking a deeper answer to this question.

Baretta Taylor, advertising director of The Decatur (Alabama) Daily, asked: "What preparation strategies would you recommend for newspapers that are Google partners or that sell local digital advertising to replace or prepare for the upcoming elimination of Third-Party Cookies?"

Jansen said Google has lots of resources that can assist with this.  He advised knowing your privacy strategy and ensuring that your staff has a good understanding of first-party cookies versus third-party cookies.  "I think we sometimes make assumptions," he said, "that everybody has the same understanding about that at your organization."

While local publications may have readers who are outside their geolocation, local newspapers — in general — serve readers in their community.

He used the example of an advertiser who may have been able to identify people who are likely to buy a Land Rover within the next three weeks, using third-party data, and will no longer be able to do that. While your paper might be able to build that segment for your audience, if it winds up being only a few people, that doesn't provide real value.  He encouraged newspaper staffs to think, instead, about broader audience strategies.  "What can you tell your advertisers about their level of engagement with your content?"